Swansplaining: White People as a Sign of the End Times 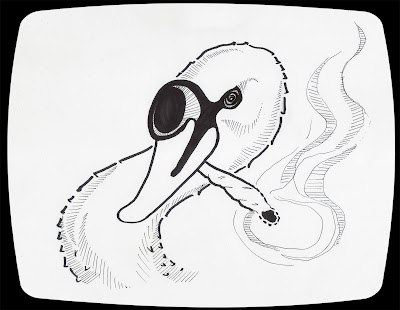 Y'all favorite pimp got some wiz-dom you gonna slide up into yo thought-vagina, bitch. Grab a seat, wigga.

Back before them dino-saucers done ninja-kicked that tower of Babylon sideways, y'all ancestual forefreaks freestyled they rhymes in a language anthopologists call, "Proto-Indo-European" or some damn shit like that. They straight called on demons and shit with that language, tradin' devils with each other like they was pokey mans. Shoot, you take away the smartphones, them ancestual hipsters ain't a damn bit different than the honkeys invadin' yo dog park right now. Well, I can thinka one difference.

See, back in the day, the most important field guide to talkin' monkeys ever writ was this bigass scroll called, "The Dread Book of the Outer Sky Worm." Like most scriptuals, it done spend all its times on prophesizin' a shitass future, where the dino-saucers come back and mutant apes spend they final days fightin' off demons with psychic karate. This shit was so scary, my hoes done wrangled up all the damn cultists talkin' about it and burned them on piles of they own scrolls, coz.

Now, if memory serve, they was a whole lotta damn detail about about a mutant race of apes who made contact with aliens on the Caucasus mountains. They done went and got probed by so many aliens, they turn white. They suffer all kinda odd sympoms from all the anal probeulatin:
Now, this list go on and on and on, but you crackas know this list is about honkeys. Most of the scrolls is just these long-ass lists about funky-ass shit white people like to do in they spare times, but a few of these scrolls was about the funky-ass shit they was gonna do in the "end times."

Bitch, please. You know how prophesies goes. They gotta be all vague and scary and shit, talk about evil political dynasties and shit, correspond to to all kinda star patterns and shit, call out a bunch of crazy-ass plagues of bugs and shit. And, you know... Hitler.

So, let's just skip all that shit, so I can makes my damn point already. The Dread Book of the Outer Sky Worm had seven great prophecies to signal the end of days, yo. Here they is, translated lovingly by yo favorite demon pimp:
Bitch, it don't take no PhD in Primatology to know them ancient chimpanzees was scared to death by these scrolls, coz. They ain't had no damn context to understand no terms like phones, videos, records, weather balloons, or girlfriends. So they done got hella scared, coz, and burned the fuck outta these scrolls. But yo boy the Swan paid attention, so this pimp remembers. And by this pimp right here's right reckoning, all that shit done already come true, playah.

So, when yo house get blown down by demons and dino-saucers and psychic karate, listen to the Silver Swan. I ain't sayin' you should blame white people, I'm just sayin' that according to ancient prophecy, you should totally blame the shit out of white people.

And buy my hoes. Sixty dollars.
Email ThisBlogThis!Share to TwitterShare to FacebookShare to Pinterest
Home
Subscribe to: Posts (Atom)