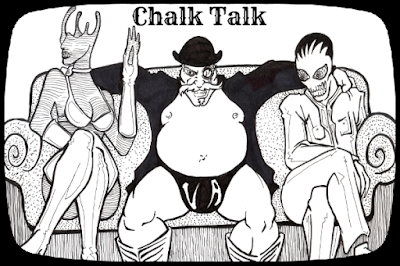 But enough about me! With the anniversary of the first two Psychic Karate field manuals, your old pal Chalk dry-humped the boundaries of time and space to bring you a hot new interview with your favorite literary heroes and narrators of those otherwise disgusting and poorly written books!

First up is my old marauding buddy, Pete Langella! He's a wily wiz when it comes to goth cultural apocrypha... and little else beyond that. Still, he's a fine conversationalist and as shapeshifting quantum tunnels go, this one really knows how to cut the old rug, that's a good chap!

Joining us is that sexy dream of a virus-fueled death spiral, Darling Thorne! She really puts the, "pomp" in, "psychopomp," let me tell you, you old fannyslammer. She has thighs that can crack a walnut and she kills by the billions, so you know I'm intrigued!

Let's see how it goes, shall we?

CC: Darling, thanks so much for being here, you deadly little minx! So glad you agreed to the interview, love!

DT: You said you could tell Us where we could find Our husband. You will lead Us to him, before long... Oh! And We're such a fan of your Riot Grrl themed burlesque show, "Pussy Gomorrah." It got a bit rapey in the final act, but the guitar riffs were fucking sick!

CC: Always delighted to encounter a fan, poppet, but that old show conjures strange memories. That guitarist was underaged, you see, and there were legal entanglements that rendered the whole enterprise rather nonprofitable, to say the bloody least. But where are my manners... have you met Pete? Where's Pete?

CC: Oh, he's a hellish hoot, kitten, you'll simply adore him. Pete? Pete, you old facesucker, you... where are you hiding?

CC: The walls? Did you hear that, my dear Darling, he said, "the walls?" Well, whatever could that mean, poppet?

DT: We didn't hear anything, Chalk.

CC: Really? I say, this is salaciously spooky! Pete, do come out and meet my new friend!

PL: What the fuck happened to the top of her head?

CC: Oooh... sorry, old bird, we really shouldn't bring that up. You know, manners, what what?

DT: Chalk, what the fuck is that! He is not Our husband...

PL: I can reconfigure my face-plates to look like a husband, if that helps. You got a picture of it? By the way, what's a "husband?" And hi. Name's... Pete. Yeah.

PL: Again with the vocabulary lesson! Listen, Darling, if that's even your real name -

PL: Whatever. Darling, I may not know what this object is you're so obsessed about, but honey, what you need is a sensible pair of pants. And a hat. A very large, very floppy hat.

CC: Oh, Pete, my lovely lad! I said NOT to mention... do you even remember the conversation in the wall? I felt like we were really forming a connexion. Now, now, everyone, let's just have a quick sitdown right here on this comfy couch. That's right. Just sitting now. No shapeshifting, no quantum phase portal manipulation, just taking a bit of the old load off, there's a pair of jolly sports, yes?

DT: You will speak with Us, Chalk. You will become Us. Our air particles approach the point of saturation as We scan and categorize ribonucleic protein surfaces housing the death memories of your particular stream of consciousness as you... become.

CC: Don't threaten me with a good time, you limber lass, you -

DT: Silence, now. The superorganic stimulus-response pattern framework perspective formally thought of as, "you" will soon be uploaded and integrated into Us, as you become You. Wait, what? What's that?

PL: What's a, "plot" and why are you smuggling it in your britches?

DT: No, We sense it now. An anomaly. Chalk, why are your cells aging in reverse?

CC: My dear damsel Darling, I can assure you I have no fanciful notion of what you're getting at!

PL: No, you're right, Darling, He can do that. I saw him do it, you know. In the future. Long time back.

DT: Hmm, Chalk. Be honest... are you Benjamin Buttoning yourself?

DT: No, his cells are undergoing reverse replication, just like in that movie!

CC: Oh, do let's change the subject, and pronto! Darling, how do you feel about the one year anniversary of your book, hmm?

CC:  Okay, sick burn! Laughs all around, but do let's get back to business -

CC: Pete, you dastardly villain! My audience doesn't know about -

PL: Long ago, in the Before Times, there was this thing called the 1970s. And on TV, this alien guy came out of an egg. Then, all of a sudden there was another egg alien guy, who looked super old, but he was actually a child or something. And they wore Star Trek suits. And by aging backwards, they took over the planet. And that show was called, "Star Wars."

DT: There was a TV show about Benjamin Buttoning egg aliens?

PL: Damn right. It was all the rage. It was called, "Star Wars" and it was the most easy to understand episode of the whole Star Trek show, for sure.

DT: This sounds amazing. We must integrate it.

CC: Pete, she's a Millennial. She wouldn't understand the reference. And again, if I've told you once I've told you several saucy times now, my good man, Star Wars and Star Trek are not the same thing.

Well, there you have it, Psychic Karate devotees, the only semi-coherent portion of the interview for your reading pleasuring. Trust me, poppets, the whole thing went even further sideways from there and I think we can all ham-fistedly and full-throatedly agree... those two should NOT be in the same place at the same time, yes yes?! And do try to gloss over that whole part at the end about my... proclivities. Those two were confused, you see, and can't grasp the concept of a, "spoiler." Yes?

Anyway, do take care of yourselves and thanks so much for popping and peeping in. Ta!
Email ThisBlogThis!Share to TwitterShare to FacebookShare to Pinterest
Home
Subscribe to: Posts (Atom)